This week a new power tool arrived on my desk: 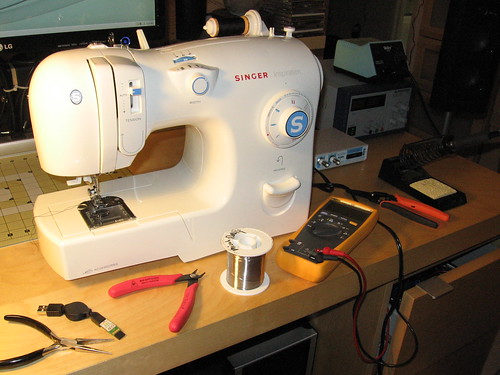 How did this happen? It was actually kind of complicated…

Whew. Ok, I have a sewing machine. So what do I do with it? 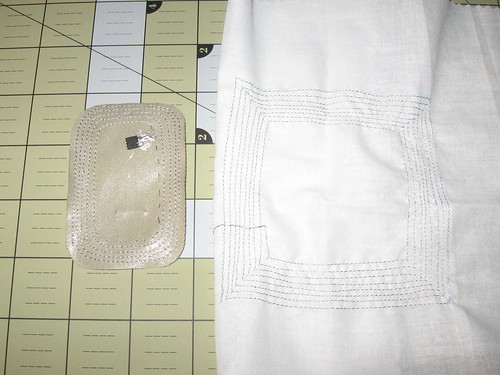 I did end up making a working cloth RFID tag. This is a 2×3 inch iron-on patch with an antenna coil made of conductive thread. I sewed the bulk of the antenna by machine (and it would have been thicker if my thread hadn’t broke) then I did the more intricate bits by hand. The antenna itself is actually conductive only on one side, since I had insulating thread in the bobbin. I ran the conductive thread back from the outside of the coil to the center of the tag by sewing on the opposite side, so as not to short-circuit the coil. The black blob is an ATtiny85 microcontroller in a SOIC-8 package.

In this tag, I attached the chip to the antenna using conductive epoxy. In my next prototype, I’ll probably use crimp beads as Leah Buechley suggests. The antenna should also really use more ‘turns’ of thread. This tag works with my Parallax RFID reader, but the range is only a few millimeters. On the right is a larger coil I was sewing for practice. This one would have been larger too, but I had problems with the thread breaking.

I plan to make more prototype RFID tags, both to practice my sewing and to try and increase the range.

So, what else can I do with this machine? I had some fun with it: 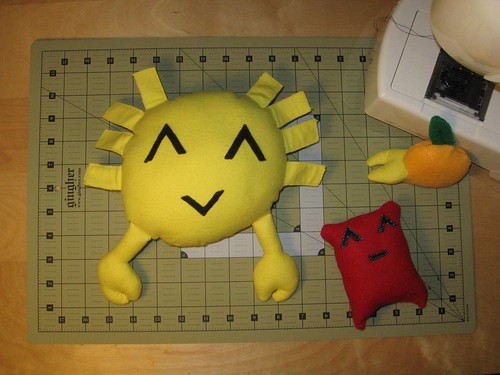 The red dude on the bottom is of course an anime smiley, which may or may not be from the Kingdom of Loathing universe. The “ears” and “legs” were totally unintentional, but I think it turned out pretty cute. Next I made the orange above it. It came out kinda lumpy, but it was good practice. I later practiced my vivisection skills by giving it the test-claw that I built while figuring out how to make my next critter- the cute yellow crab in the middle.

You may remember the crab from an earlier post of mine. It’s kind of a chibi version of Ikea’s KORALL KRABBA. They’re so cute together! 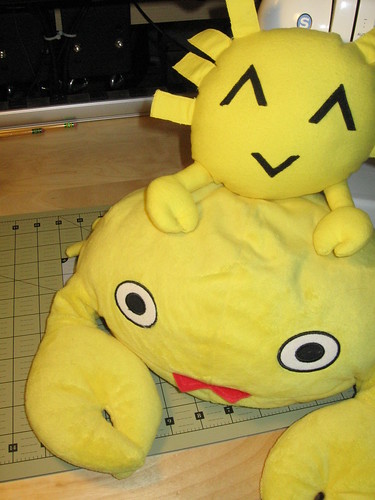