Life has been super crazy lately, and I haven’t taken much time out lately for hacking on projects. This weekend, though, I finally got that magic combination of time and motivation back, yay.

The occasion: I still owe my boyfriend some cute plushies. Oh, and perhaps I want to try sewing myself a skirt. (Maybe someday I’ll even make a North Skirt). But for any of that, I need my sewing machine to work. Well, it did work… I was just getting annoyed by having to have it hooked up to a computer, and loading different firmware images onto it for different sewing modes. I’d been meaning to add some kind of user interface to the project, but I decided to save that part of the project for later. Well, the future is now… or yesterday, at least?

I had a rather cute 128×128 Nokia 6100 knockoff LCD that I wanted to use with the project. It’s inexpensive, not a bad quality/price tradeoff, and they’re pretty easy to interface with. Spark Fun already has plenty of drivers on their page for different microcontrollers. But of course, not a Propeller. And after searching through the Parallax forums, I couldn’t find any existing driver that was open source, fast, and that actually worked with my LCD.

So, the first step was to write a driver. And thus the first deliverable of the weekend: 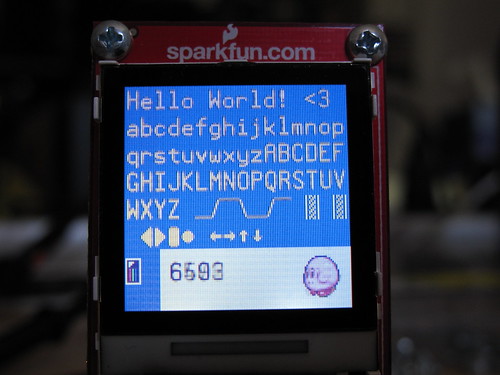 With that out of the way, the rest of the job was pretty easy. I really wish I’d done this earlier, since the graphical LCD makes a great tool for illustrating the internal state of the machine’s motion controller. I decided to leave some graphs on it that show current pedal position, shaft angle estimate, and RPM estimate. Oh, and I demand cuteness! So, there’s also a little Kirby sprite that walks along at a rate proportional to how fast you’re sewing. But Kirby is tired, and if you don’t sew his eyelids get heavy… 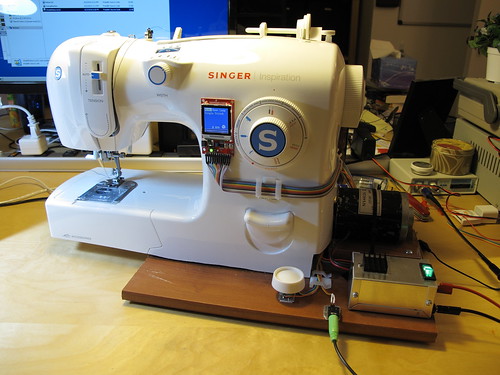