I got a Nintendo DSi earlier this month. It’s a really cute little console, and a nice revision to the DS Lite. Screens are slightly larger, CPU is about twice as fast, 4x the RAM. And of course it has these camera thingies. Other folks have teardowns online with internal photos aplenty 🙂

So, I spent a week or so tooling around with the DSi doing normal consumer and/or homebrew things with it. Played some The World Ends With You, got an Acekard 2i and tried running some homebrew. Its DS compatibility mode seems to be pretty good. The only compatibility bug I bumped into was running my work-in-progress Robot Odyssey port. It mostly worked, but there was a little bit of crackling in the audio. Not surprising, I’m doing the audio in a somewhat unconventional way, and it doesn’t work properly in any DS emulator either 🙂

The DSi is pretty cute, but it would be nice if we could use its new features for homebrew software. It would be especially cool if you could run homebrew directly from its built-in SD card reader, without the need for any special-purpose hardware. That would really open the door to some cool indie games that nearly anyone could play.

Need to satisfy my curiosity, then. Out come the jewler’s screwdrivers, antistatic mat, and SMD rework tools…

There are a few other people working on hacking the DSi from other avenues. Team Twiizers just released a video of a save game exploit that they’re using to run code in DSi mode. This is pretty cool, and as far as I know it’s the first time a hobbyist has been able to run code in DSi mode. I’m not sure how much if any of the new hardware they’ve managed to reverse engineer through this hack.

There are also a handful of Wii hackers that have noticed that the DSi has pretty much the same file format for its downloadable games, so they’re trying to come up with a way to install homebrew DSiWare apps. Unfortunately, they need the system’s private key- and brute-forcing it doesn’t seem too promising. One way to get this private key would be to extract it from the DSi’s firmware.

The thing that interests me the most right now is figuring out how the DSi boots. There are plenty of other layers of software that you can exploit from the outside- but the bootloader and built-in firmware seems like the best starting point for any serious effort to reverse engineer the DSi’s hardware.

The DSi has upgradeable firmware, and there’s only one visible place that it could be stored: a 256 MB NAND flash chip. This is actually an embedded MMC (eMMC) chip from Samsung. It’s electrically pretty much the same as an MMC card, but in a tiny BGA form factor. It is wired directly up to the CPU, which would indicate that there is some kind of hardware or software bootloader that knows how to pull code off of the eMMC chip during early boot. This probably means there’s a mask ROM in the same package as the CPU. It would also make sense that this ROM would know how to write an initial firmware image to the eMMC chip during manufacturing, since there is no other way to access the eMMC chip after it’s soldered to the DSi’s main board.

I was hoping that the MMC data lines would be accessible via some of the many test points. None of them were obviously related to the NAND, though. I tried probing the SPI bus, where the original DS kept its firmware, but the eMMC chip was definitely on a separate bus. It didn’t help at all that the DSi refuses to boot unless every single one of its peripherals are attached, so this makes it rather hard to poke around the board’s test points while it’s running.

At this point I assumed that the traces running from eMMC chip to CPU were completely buried. My last recourse: desolder the eMMC chip, and hook it up to some kind of test jig that would let me read back its contents. Then perhaps I could copy it to a normal MMC card, and wire up an MMC socket on the DSi.

After practicing my BGA rework technique a bit, I desoldered the eMMC chip. If you power the DSi on without the eMMC chip, it displays a nice hexadecimal error code. This would seem to indicate that there is indeed a mask ROM in the CPU package- a hardware bootloader wouldn’t be smart enough to display a “nice” error like this. 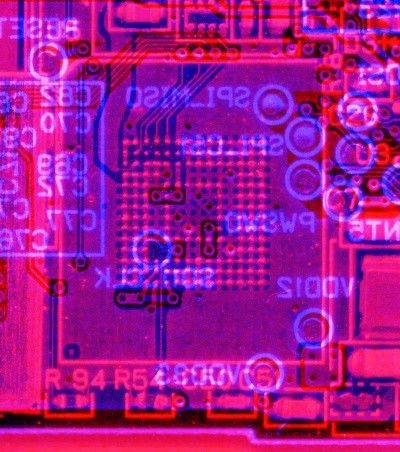 There was a pleasant surprise underneath the eMMC chip: All of the data signals were in fact accessible on nearby components or vias. I didn’t find them earlier, since I couldn’t really poke around with the ‘scope and have the board access the eMMC at the same time. But, armed with this knowledge, I could switch to a simpler approach: Solder the eMMC chip back on, then build a passive sniffer that tells me exactly what reads and writes the DSi’s CPU makes.

By some miracle, I managed to get the eMMC chip soldered back on successfully. The DSi’s mainboard is a huge pain to do BGA rework on, at least with the tools I have. It has so many ground/power planes and fills that the board is really hard to keep hot with just a hot-air rework tool.

My poor DSi then is ‘mostly’ back in one piece. Now I’m working on the next step: Hooking up an FPGA that can dump all the memory reads/writes over USB 🙂

More stuff: There are a few more pictures on flickr, and I started a thread with a few more technical details on the gbadev forums.