I think I got my sewing machine to stop randomly rebooting! 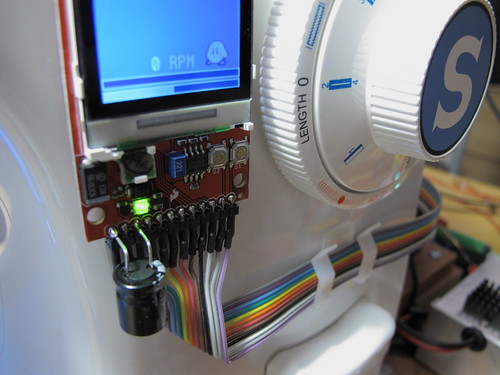 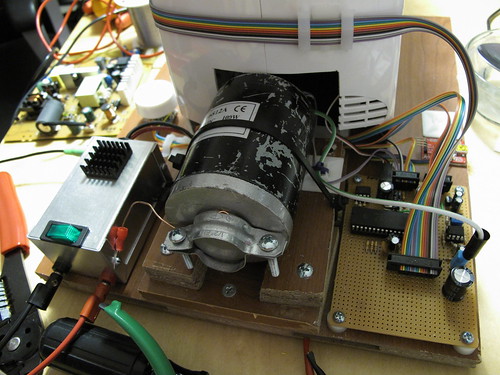 This isn’t the first time I’ve delt with EMI problems in my hobby projects, but this one actually turned out to be a lot more annoying than the others. This project has no really high-frequency signals, no super-wide parallel busses, no 100 MHz clocks. But it does have a few ingredients in a small recipe for disaster:

The symptoms were usually pretty simple. At random intervals while sewing, sometimes after 15 minutes, sometimes after only 2 seconds, the whole system would reboot. The microcontroller resets, and everything goes on like normal. Sometimes instead of rebooting, the LCD would become corrupted but the system would otherwise be fine. Sometimes the motor speed controller (on one of the microcontroller ‘cogs’) would keep running, but the UI (on a different ‘cog’) would crash. Sometimes there would be noise in the tachometer sensor, causing the estimated machine angle to ‘creep’ upwards slowly.

Most of these symptoms seemed like power noise. So I tried adding capacitors, isolating the power supplies, etc. Some of these seemed to make the problem a bit better, but nothing solved it completely. Even with the high-current components totally isolated from the microcontroller, I’d see crashes. So bit by bit, I started the process of elimination, and I ended up with a pretty long list of fixes. I still don’t know if each and every one of these was necessary, but at this point I feel like I’m a doctor trying to cure some terminal illness. I guess about the root cause, prescribe some medication, and if that doesn’t help I try something else. Or if the situation is getting desperate, we’ll just try everything at once. So, before I ended up declaring the problem solved, I ended up doing all of the following:

Whew.. and after all that, I think it’s finally all fixed.