As much as I like the long, complicated projects that involve weeks of soldering, gluing, coding, tweaking, re-tweaking and debugging, it’s really refreshing to occasionally do something cool with no more than an hour or two of work.

This mini-project was my boyfriend’s idea. It’s an experiment in cooperative two-player Gitaroo Man, played using a gamepad for attack/charge and DDR pad for defense.

For those who aren’t familiar with it, Gitaroo Man is a rhythm game where you do battle using music. You play music on your gitaroo to attack or to charge your health bar. To defend against the enemy’s attacks, you dodge by pressing buttons in time with icons that fly toward the center of the screen. We thought the dodging phase of the game might map well to a DDR pad.

Videos first, tech details below. My boyfriend is on the gamepad, and one of my friends defends with the DDR pad. Theoretically you can play this with one person, but we suck too much at the moment. When we filmed this, we hadn’t played Gitaroo Man in years.. so we definitely could have done better with some more practice 🙂

This turned out to be such a quick project because it was really just some special-purpose firmware for my old Unicone2 controller emulator project. The firmware combines inputs from the gamepad and DDR pad, maps the DDR arrows to the buttons used for blocking in Gitaroo Man, and it includes a one-shot timer which converts sustained pressure on a dance pad arrow into a brief tap of the corresponding controller button. This way, standing still on the DDR pad won’t affect your ability to use the controller buttons normally during the attack phase.

Overview of all hardware and software components: 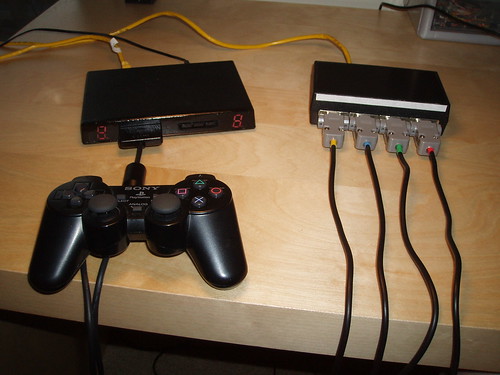