This is another mini-project that began, like so many have, in a discussion with Scott over some beer. We wanted to build a new kind of speaker amplifier, which used mechanical closed-loop feedback to position the speaker cone exactly where the audio signal says it should be. We figured that, if done right, this could yield higher audio quality from cheaper speakers.

So, that idea is pretty crazy, but it seemed just barely plausible enough that I had been thinking about the component parts of such an amplifier. The most important seemed to be a sensor that could accurately supply feedback on the speaker cone position without loading the speaker or distorting the cone. The first method we considered was a capacitive pickup. Paint the back of the speaker cone with conductive paint, then position two copper plates behind the cone, just barely not touching when the speaker is at its maximum throw. This acts like two capacitors in series, and gives you a capacitance that varies along with the audio frequency, without any mechanical connection to the speaker cone.

We also considered magnetic feedback, using something like an LVDT, but where one coil is the voice coil itself. This would involve modulating some kind of high-frequency carrier into the speaker drive signal, then placing another fixed coil around or behind the voice coil to pick up that signal.

The next method, and I guess the simplest, is optical. This would work a lot like a fiber optic microphone or an optical guitar pickup. You can measure vibration by detecting changes in light intensity caused by changes in distance or angle of some reflective thing that’s vibrating.

Whereas the capacitive and LVDT ideas require a high-frequency modulated signal, that’s optional with the optical method. You can measure absolute intensity, or you can modulate your LED with a high-frequency carrier that can be detected on the receiving end. This modulation can help reject ambient light (including hum from fluorescent lights) but it isn’t required.

So, to see if this project has even a tiny chance of working, I thought I’d prototype the optical sensor by building an optical microphone. The end results were rather mediocre. I’m posting it here only because:

This is a really simple back-of-the-envelope sort of transimpedance amplifier, high-pass filter, and gain stage. Disclaimer: I hate doing math for analog circuits when it’s just a quick hobby project, so I did no math in designing this. Take it with a few shakes of salt. My breadboard was humming pretty badly due to incoming EMI, so I built it dead-bug style in a mini Altoids tin. If you build this, definitely use a suitable amount of shielding. 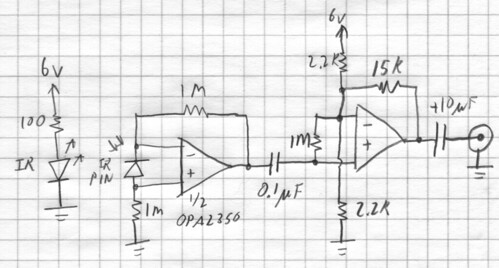 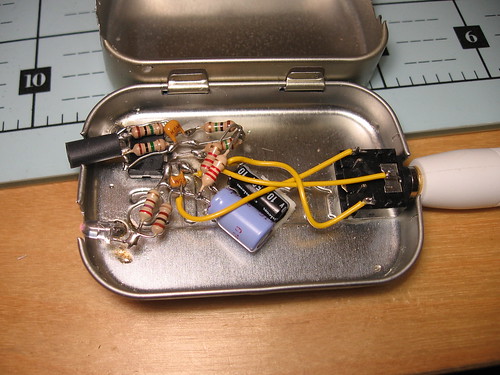 The first successful test I had of this pickup was with a rubber band. I’d like to try this with a guitar string, but I don’t play 🙂

It’s actually pretty forgiving about the positioning of the pickup relative to the rubber band, and it’s very sensitive even when the rubber band is a few inches away. This circuit can pick up very low-frequency vibrations well, so you hear very deep bass notes that you don’t normally notice in a rubber band pluck. 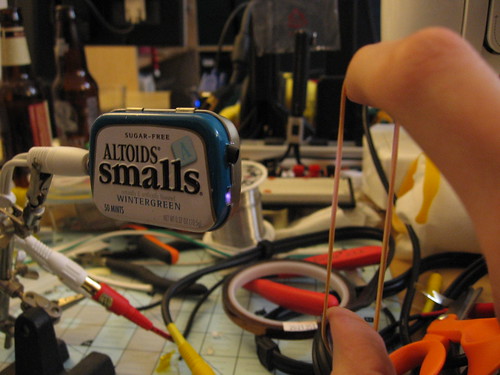 This is the application I originally hoped the optical microphone would work for: picking up sound off the front or back surface of a loudspeaker cone. If I could do this really well, the closed-loop amplifier might have a chance. The results certainly weren’t hi-fi, but I guess I was still surprised it worked at all.

Unlike the rubber band, this test was extremely finicky. I had to position the pickup just right, and I used some Kapton tape to make the surface of the speaker more reflective to IR light. I also had trouble getting a good reflection off the curved surface of the cone, so I stretched a flat section of tape between the center dome and the middle of the cone. This gave good signal strength, but the tape itself also acted as a mechanical filter, giving kind of an odd frequency response to the whole system. 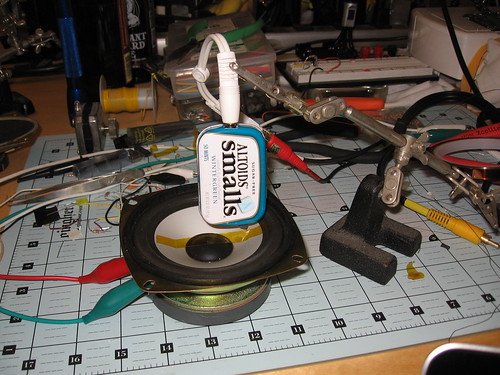 And that is all.

Hopefully this will allow me to have some closure on a completely mediocre mini-project that was nonetheless interesting enough that I couldn’t just forget about it without sharing. 🙂 If anyone reading is a real electrical engineer, I’d be interested in hearing about what I did wrong.

So, kind of on a random whim, I decided to build a software SPDIF encoder for the Propeller chip. It was an interesting challenge, and the results are pretty cool, but now I have no idea what do do with it. Not an uncommon problem for me, I guess…

Maybe I’ll give my Propeller board an Ethernet port and build a Squeezebox-on-a-chip.

Update: Ok, so maybe that’s not such a crazy idea.. (or is it?) Anyway, I just found this, and I had to order a couple:

Yikes, it’s been nearly a month since I updated this last. A lot has happened since then… but I’ll skip to some more recent things.

David is a Californian, as of last Tuesday! He kept busy buying furniture and waiting in line at the DMV, but I did manage to see him at my birthday dinner last week. He and I cooked dinner last night: Ahi tuna steaks with a southwestern papaya/pineapple/habanero salsa, and a habanero pilaf dish on the side. Mmm.

I’ve been in a tinkery mood lately. I recently replaced my old noisy analog audio routing system (an A/B box and about 30 feet of cable) with a shiny new all-digital solution. I have a USB sound adaptor near the TV. It gets digital audio from the TV, and outputs directly to the speakers. It’s attached to the computer in my nearby cabinet, which does all the mixing in software.

After trying several software solutions for the audio mixing problem, I’ve settled on PulseAudio with a trivial extension module that routes audio from the TV input directly to the speaker output. I can now play TV audio, music from MPD, networked audio from my laptop, or any combination of the above. Latency hasn’t been noticeable, though I haven’t done any measurements yet.

The computer in my closet (mini-navi) has gone through a couple more revisions. In order to support audio mixing and icecast, I upgraded it from an NSLU2 to my old 700 MHz PIII laptop. This gave me the performance I needed, but that old laptop has some really serious Cardbus interrupt routing issues that prevented me from getting USB 2.0 working properly. After all that frustration, I splurged a little and got a mini-itx board with a 1 GHz Via C3. I love the novelty of mounting a motherboard with wood screws.

Before dinner with David last night, we decided to finally buy Guitar Hero. There had always been talk of building a wireless guitar controller…