Over the weekend, I had a chance to finish up a project that I started (and immediately became distracted from) several weeks ago.

In our house, Paul and I have a game room. This is where the video games live, as well as other assorted geekery. We have Magic cards, D&D books, some manga.. it’s super nerdy 🙂

Best of all, Paul has a Lego city on display. We had been looking for an interesting way to add light to the city, so when I saw some RGB LED light strips for sale at Ikea, I knew I had to mod them. In their stock configuration, these light strips can do boring fully-saturated colors, and you switch between them with a boring push-button switch.

After ripping apart the Ikea light and rummaging through my junk drawers, I came up with this: 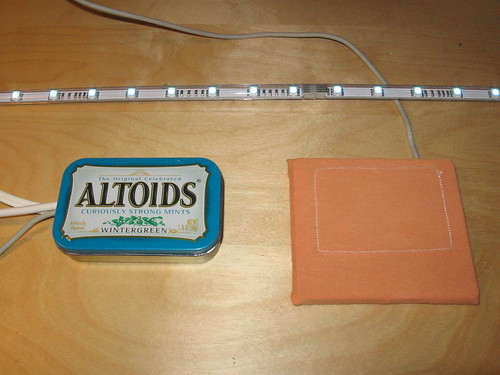 The Altoids tin has the modified driver circuit: It’s the original circuit board with the microcontroller removed, then a homemade Arduino clone to control it. The orange box is an old Cirque PS/2 touchpad, removed from its original case and covered in fabric.

The Arduino sketch (firmware) is a little C++ program that reads the touchpad and uses it to control Hue and Lightness in the HSL color space. The result is a pretty intuitive and unobtrusive control which makes it easy to both pick a color and desaturate it toward white or dim it toward black. You can easily get some really nice sunset and sky colors.

I measured the power consumption of the completed light at between 1 and 6 watts. With Bay Area electric rates, this means you’d pay about 7 cents a month to leave it plugged in with the lights fully off, twice that to constantly backlight your Lego city in a dim orange glow, and a maximum of 50 cents a month to run the light at full brightness continuously.

For many more pictures of the final installation and the build process, check out my Ikea DIODER set on Flickr.