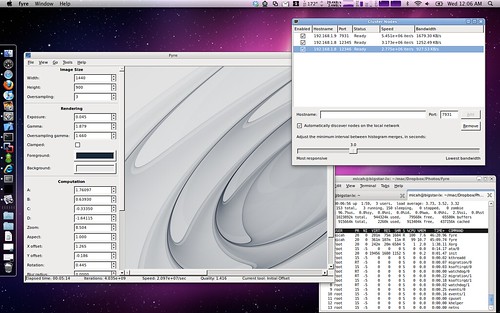 I’ve been making slow progress on packing today- got all my books boxed up, along with many of my less fragile electro-widgets and such. This type of behaviour leads to procrastination, naturally.

I’ve been running the Deer Park Alpha 2 release of Firefox for a couple days. It does seem to be faster at DHTML, though I don’t have any of the really heavy-duty Javascript I wrote for Destiny M&M handy for benchmarking purposes. The coolest features destined to end up in Firefox 1.1, from my point of view, are SVG support and the “canvas” element.

Canvas is a very misunderstood HTML extension. It’s a new element that Apple invented mostly to make it easier to implement Dashboard. That part of the story is a little silly, and results in a lot of SVG advocacy and a lot of potential users suggesting to Apple places where they might shove their nonstandard hacks.

Well, it turns out that Canvas is indeed a standard- or at least a standard draft. Furthermore, it’s been implemented by the Gecko team, and happily runs in Deer Park. If you read the API, you notice that Canvas and SVG are really solutions to two completely different problems. SVG is a very complicated and very featureful scene graph built on XML, whereas Canvas looks more like a minimal vector drawing and raster compositing library for JavaScript. Canvas uses a simple immediate-mode interface for rendering to a bitmap, which makes it ideal for games or special effects, or for client-side image manipulation applications.

Canvas is so cool I had to abuse it. A while back I tried to render the Peter de Jong map in Javascript, basically making a very slow and crippled but very portable version of Fyre. Anything scene-graph-like, such as your usual DHTML tactics, would be disgustingly slow and memory-intensive. I ended up using Pnglets, a Javascript library that encodes PNG images entirely client-side. This worked, but was only slightly less disgustingly slow.

Anyway, the result of porting this little demo to Canvas was pretty neat. It’s still no speed demon, but it’s very impressive compared to the Pnglets version. It’s fast enough to be somewhat interactive, and it has at least basic compositing of the variety that Fyre had before we discovered histogram rendering. If you have Deer Park, Firefox 1.1, or a recent version of Safari you should be able to run the demo yourself.